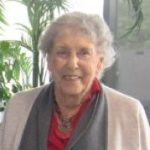 It is with deep sadness that we acknowledge the recent passing of long time tennis supporter and Tennis Auckland Past President Heather Robson.   Heather was a talented tennis player both nationally and internationally.