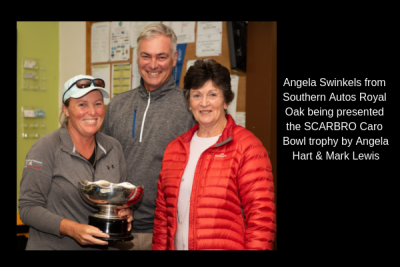 Royal Oak won the 2018 Women’s Scarbro Caro Bowl on Friday night when they defeated Bucklands Beach 4-2 in the final.  In windy conditions at the Royal Oak Racquets Club on Friday night, the more experienced home side proved too strong for the young Bucklands Beach team.  Leela Beattie and Holly Stewart made short work of Jade Otway/Tamara Anderson in the top doubles before Abby Mason and Anna Tamanika levelled the tie by comfortably beating Angela Swinkels and Abby Guthrie.  Leela Beattie was dominant in the top singles and overpowered Tamara Anderson to give the Oak a 2-1 lead.  Ana Tamanika started well in her match but Holly Stewart bounced back to win in straight sets and open up a 3-1 lead for her team.  Attention turned to the number two singles between Sarah Weekley (Royal Oak) and Jade Otway.  Bucklands Beach needed a straight sets win to keep the tie alive and things looked promising when Otway won the opening set.  However, that seemed to trigger a change of gear in her young opponent who fought back to win in three.  The win clinched the title for Royal Oak for the 2nd time in the last three years.  Abby Mason at number four won the last singles match for Bucklands Beach but not before her opponent saved several match points.  Royal Oak were unbeaten this season and fully deserved to be crowned champions this year.

Go to the SCARBRO Caro Bowl section at www.tennisauckland.co.nz for full draws and results.