There was no shortage of drama last Friday at the Women’s Scarbro Caro Bowl Final between Sunnyhills and Bucklands Beach.  Traffic jams, missed flights, late arrivals and early departures created plenty of excitement even before the first ball was struck.  Sunnyhills was forced to rope in Liz Lombard from a lower team to play the opening doubles because Tharubphet Homkrun missed her flight out of Palmerston North.  Fortunately she arrived in time to play her singles match.  Bucklands Beach were missing Ines Stephani at number two due to a family commitment and also had to drag players up from lower grades.  With both teams at less than full strength the battle began.

First up were the two doubles matches.  Kelly Southwood and Liz Lombard took on Jade Otway and Abby Mason in the top slot.  The Bucklands Beach pairing of Otway and Mason were too solid and won in straight sets.  Meanwhile on the adjacent court, the call up team of Chapman and Portegys (BB) raced out to a 5-2 lead in the first set against Miyaura and Drew.  An upset was on the cards for a while but the Sunnyhills pair reeled off eleven straight games to tie the contest at 1-1.

As the sun went down on a balmy evening, all four singles matches took to the courts.  Three of these matches turned out to be rather one sided with Sunnyhills winning the bottom two in straight sets while Abby Mason won the second singles for Bucklands.  With the overall score standing at 3-2 in favour of Sunnyhills, the spotlight was placed on the feature match between Otway and Southwood.  The two players had faced each other twice in recent weeks with Southwood winning both times.  Not on Friday.  Otway played a blinder to win 6-4 6-4 in a high quality contest livestreamed across the country.  The final was locked up at 3-3 and tied on sets won.  A countback of games was required to break the deadlock and after some serious deliberation by officials Sunnyhills were declared the winners of the Scarbro Caro Bowl for the fourth time in the space of six years.

Congratulations to the winners and the runners-up on a fantastic season.  A big thank you to Scarbro Construction for their ongoing sponsorship of this competition which is celebrating 100 years making it one of the oldest competitions in New Zealand.  Koru (Pakuranga) Tennis Club did a wonderful job hosting the final and a large crowd turned out to support their clubs.  Last word of thanks goes to the commentary team of Simon Rea and Elliott Smith and The Stream Shop who produced the livestreaming of the final on the Tennis Auckland Facebook page. 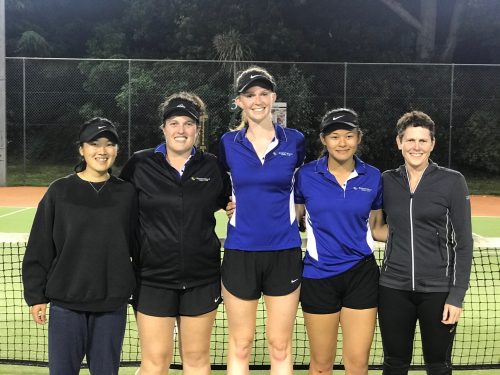 Bottom placed teams Remuera and Royal Oak squared off against each other at the Remuera Rackets Club on Friday to decide which team would be relegated next season.  The home side collected both doubles matches to open up what proved to be an insurmountable lead on the night.  Alex Klintcharov widened the gap winning the top singles against Alex Hamilton.  The final result was a 5-1 victory for Remuera who will stay in the competition next year.  Royal Oak, for many years a stalwart of the men’s competition, will be relegated to Caro Bowl Reserve grade for 2020.

Go to the SCARBRO Caro Bowl section at https://www.tennisauckland.co.nz/scarbro-caro-bowl for full draws and results\