The Men’s Scarbro Caro Bowl final was played in perfect conditions last Friday evening at the ASB Tennis Arena.  A large crowd enjoyed high quality matches and Next Gen hospitality as Cockle Bay and Next Gen played for the title. 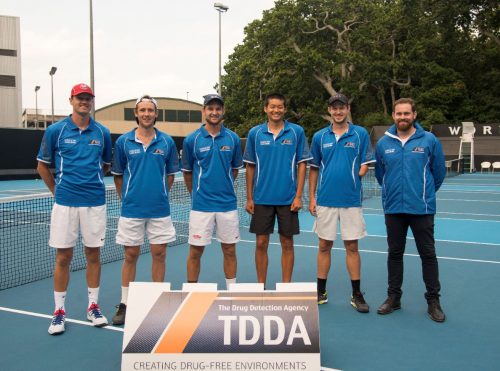 The Next Gen side were dealt some bad news earlier in the day when they were informed that their number one player Rhett Purcell was not going to play.   Rhett was playing the qualifying tournament for the Australian Open wildcard in China and his absence dealt a major blow to Next Gen’s chances of winning.

The two doubles matches started on time at 6pm and produced some quality tennis.  In the top doubles, James Meredith and Connor Heap defeated the hard-hitting Finn Reynolds and Corban Crowther in two tough sets to put the first point on the board for Cockle Bay.  The other doubles went the distance with the Cockle Bay pairing of Alex Hunt and Rob Reynolds prevailing in a super tie-break decider against Anton Shepp and Sven van Touw.

Three singles matches were put on court shortly after the doubles concluded.  Connor Heap extended the Cockle Bay lead to 3-0 when he won in two sets against van Touw.  Meredith and Finn Reynolds engaged in a real dogfight on the feature court while Corban Crowther fought hard to take the opening set of his match with Alex Hunt.  Next Gen, right up against the wall at this point, needed to win all three remaining singles without losing another set.  They were still alive but only just.

The final blow was struck by Alex Hunt when he won the second set against Crowther in the number three singles rubber.  This gave Cockle Bay an insurmountable lead and all three matches ended abruptly which was a little bit disappointing for the large crowd who wanted to see more tennis on the night.  However, some of the players had to play early the next morning in the 18u Nationals and Finn Reynolds, after two knee surgeries this year, was reluctant to carry on if there was no hope of winning the title for his team.

With the matches over, attention turned to the presentation of the Scarbro Caro Bowl by Mary Rose Scarborough.  Scarbro Construction have been long time sponsors of the event and it was only fitting that a new team had its name engraved on the 100 year old trophy at the old home of tennis in Auckland.  Celebrations began shortly afterward and Cockle Bay can be enormously proud of its achievement this season.

Go to the SCARBRO Caro Bowl section at https://www.tennisauckland.co.nz/scarbro-caro-bowl for full draws and results